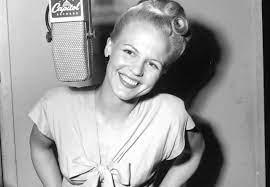 Over the course of seven decades, Peggy Lee redefined the role of the female singer, paving the way for those who followed. In addition to accumulating more than 270 songwriting credits, 1,100 masters, 50 original albums, 800 radio performances, and 200 television appearances, Peggy Lee also conquered acting and film music composition. Lee was involved in every aspect of her performances, from producing to costume and lighting design, and her stage presence exhibited unmatched vocal control, poise and swagger. She was a creative powerhouse, directing her life and career on her own terms. She is often cited as an inspiration for contemporary female singers including Billie Eilish, k.d. lang, Diana Krall, Debbie Harry, Adele, and Katy Perry.
Click here for more information about this activity
Please help us keep this calendar up to date! If this activity is sold out, canceled, or otherwise needs alteration, email mindy@kidsoutandabout.com so we can update it immediately.

*Times, dates, and prices of any activity posted to our calendars are subject to change. Please be sure to click through directly to the organization’s website to verify.

All Ages Adults & kids together Adults without kids