FEATURED EVENTS | Kids Out and About San Fernando Valley

Full Circle: A Return to the Land - Descanso Gardens

Elwood P. Dowd insists on including his friend Harvey in all of his sister Veta’s social gatherings. Trouble is, Harvey is an imaginary six-and-a-half-foot-tall rabbit. To avoid future embarrassment for her family—and especially for her daughter, Myrtle Mae—Veta decides to have Elwood committed to a sanitarium. At the sanitarium, a frantic Veta explains to the staff that her years of living with Elwood’s hallucination have caused her to see Harvey also, and so the doctors mistakenly commit her instead of her mild-mannered brother. The truth comes out, however; Veta is freed, and the search is on for Elwood, who eventually arrives at the sanitarium of his own volition, looking for Harvey. But it seems that Elwood and his invisible companion have had a strange influence on more than one of the doctors. Only at the end does Veta realize that maybe Harvey isn’t so bad after all.
Dates:
01/27/2022
01/28/2022
01/29/2022
Show more dates
Hide these dates
01/30/2022
02/04/2022
02/05/2022
02/06/2022
02/11/2022
02/12/2022
Show Times Jan. 21 – Feb. 12, 2022 Friday & Saturday at 8 p.m., Sunday at 2 p.m. Thurs., Jan. 27 at 8 p.m., Saturday Feb. 5 & 12 at 2 p.m.
Learn More

Public Skate is for families or individuals who are looking to work on skating skills and exercise the body in a safe and fun environment. All participants must pre-register as camps are limited in size! Create the Dash Platform with the main adult's name and info and then add all other family members as children if you want to pay together. Safety Protocols and guidelines must be adhered to and masks worn at all times. Everyone will be temperature checked before entering. Social distancing will be strictly enforced. No food or drinks permitted in the facilities during camps. All sales are final!
Dates:
01/24/2022
01/25/2022
01/26/2022
Show more dates
Hide these dates
01/27/2022
01/28/2022
01/29/2022
01/30/2022
01/31/2022
Check Website for Times
Learn More 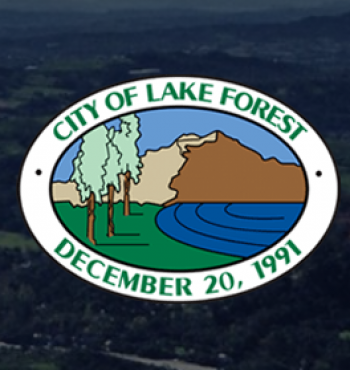 Come be a part of this annual winter event and hit the snow laden slopes at Pittsford Park! Grab the kids, the camera, and your friends and come play in the snow at this special event. Sleds and saucers will be available for you and your family to slide down Mount Pittsford. There will also be a free snow play area for kids 10 and under open during the entire event. Check out additional attractions and games at the event and bring your camera for guest appearances from a galaxy far far away. Food and drinks are also available for a nominal fee. Pre-registration is mandatory. Sledding wristbands are usually sold out by the time of the event. Everyone who sleds down the hill must have a pre-purchased wristband.
Dates:
01/29/2022
Check Website for Times
Learn More 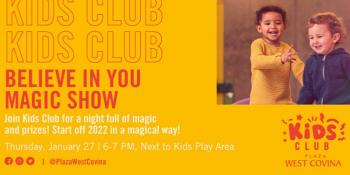 Kids Club takes place every month at Plaza West Covina! Hello Shoppers! This month our Kids Club presents Believe in YOU Magic Show! Magician Mark Paskell will host a one-of-a-kind show for children (and parents) of all ages, including making a lucky kids club member appear out of thin air and win amazing prizes such as tickets to The Magic Castle in Los Angeles!
Dates:
01/27/2022
6:00 PM – 7:00 PM PST
Learn More